This trip will take you to discover the largest and most amazing parks of southern Tanzania, where the reduced number of tourists has not penetrated the complex and fragile eco system yet. A Natural Reserve of over 58 thousand square kilometers, included in UNESCO's World Heritage. This unique place on earth offers splendid view of the largest population of mammals in whole Africa! An uninhabited territory, without a trace of human interference with the environment, ideal for visitors who are looking for something more than a classic  game drive. During the dry season, from July to October, you shouldn’t miss one of the most fascinating show offered by nature: the great migration of elephants from The Selous moving to the Niassa Game Reserve in Mozambique, one of the most famous in Africa.

If you wish a tailor made trip, please contact us, we will plan together your own itinerary! On request extensions available for Pemba, Zanzibar and Mafia Island.

Day 1°: Dar Es Salaam – Selous Game Park
Morning arrival in Dar Es Salaam, transfer to the domestic flights terminal and boarding the flight to The Selous Game Park.  Soon arrival in The Selous. Here you will have your first game drive during the 4x4 transfer to Lake Manze Tented Camp. Rangers and English speaking guide will be at your service. Dinner and overnight at the camp in double tents with private facilities. Meal Plan: dinner.

Day 2° and 3°: Selous Game Park
After breakfast, enjoy whatever you like to do most !The camp offers three main activities: boat safaris, game drives or walking safaris with lunch at the camp. Alternatively spend a full day on an exciting game drive with picnic lunch. Dinner and overnight at the camp. Meal Plan: full board (drinks not included).

Day 4°: Selous Game Park  - Ruaha National Park
After breakfast, transfer to the airstrip of the reserve and departure to The Ruaha Park.  Upon arrival, you will enjoy your first safari in 4x4 vehicles on the way to the tented camp where you will arrive on time for lunch. In the afternoon the 4X4 game drive will continue or, optionally, birdwatching, accompanied by rangers and guides and alternatively a walking safaris along the banks of the great Ruaha River. Dinner and overnight at the Mdonya Old River Camp in double tents with private facilities.

From day 5° to day 7°: Ruaha National Park
Days dedicated to game drives in this beautiful national park still unknown and extremely rich in wildlife. Lunch box (strongly recommended), or game drive in the morning, lunch at the camp and game drive in the afternoon. Dinner and overnight at the camp.

Day 8°: Ruaha National Park - Dar es Salaam
After breakfast, transfer to the airport for a domestic flight to Dar es Salaam in time for the intercontinental flight. After customs formalities boarding the flight to USA and end of our service.

Quotations are for person in double room and full board (drinks not included).

Price not includes
- Travel, medical and cancellation insurance
- Registration Fee 40,00 euro
- Visa to be paid on arrival Usd 50,00
- Extras and tips
- Anything not mentioned in "Price includes"
- Walking safari to be agreed with the camp authorities supplement will be required

THE SELOUS GAME PARK
The Selous Game Reserve is one of the largest protected areas on planet with a surface area of 45 thousand sq. km. Its name comes from Frederick Courtney Selous, the most famous white hunter in Africa. In this Game Reserve about 750 thousand mammals live including elephants, buffalos, hippos, crocodiles and wild dogs. If you are lucky you will also meet families of lions, leopards and also some cheetahs. More than 440 species of birds will charm birdwatching lovers.
It ‘s 'an uninhabited land, with no trace of human interference with the environment, where is concentrated the largest population of mammals in Africa. Together with the Mikumi National Park it  is one of the UNESCO's World Heritage .
The Selous is a tremendous opportunity for visitors looking for something more than a classic safari: in addition to the traditional game drives in 4x4 vehicles you will experience the best boat safaris and also walking safaris  allowed, of course accompanied by a skilled ranger. The reserve is crossed by three rivers: the Rufiji, the biggest river in Tanzania that creates very suggestive panoramas, the Beho Beho and the Ruaha River. These two main water suppliers  create channels, small islands and marshes. Speaking about interesting spots not to be missed: the Stiegler's Gorge, 100 meters deep, is simply extraordinary !!.
During the dry season (from July to October) you can witness a unique event in the world: the great elephants ‘ migration, one of the most important in Africa, moving from The Selous to the Niassa Game Reserve in Mozambique.

RUAHA NATIONAL PARK
After The Selous, The Ruaha National Park (13,000 sq km) is the largest protected area in Tanzania, and one of its best kept secrets, with an impressive variety of flora (1400 species compared to 600 of the Serengeti) and a rich variety of fauna except for the black rhinoceros, whose population is kept well hidden.
The park is crossed by the Ruaha River which runs through both the territory of the Great Rift Valley and the plateau beyond the escarpment of Ruaha, including a wide variety of different habitats and ecosystems. The plateau is rich in Miombo forests whereas, lower down, in the bed of the Rift, you can see acacia and baobab forests, wetlands, hills, meadows. Evergreen forests grow  overthere with palms and ficus sycamore trees on the banks of rivers and small torrents flowing through.
In addition to the Ruaha River, another  two rivers run through the park: the Mwagusi and the Mdonya, where waters flow only during the rainy season as only few residual puddles remain during the rest of the year. Nevertheless, water is always present beneath the bed of the river and it is usual to spot elephants digging the bed in order to drink uncontaminated underground water.
Many species of animals are visible in the park ,such as a wide variety of antelopes including eland, dik dik Kirk, the greater kudu and lesser kudu (this is the only park in East Africa to host both species of kudu), sable antelope, roan antelope ,large eland antelopes. Moreover, elephants, great herds of buffalos , meerkats and mongooses, crocodiles and hippos. Of course there is also plenty of predators, especially during the dry season, when they can find huge quantities of food  given the abundance of wildlife. Among these lions, that can be met daily during excursions, leopards, cheetahs, jackals and herds of wild dogs unlikely to be found in all the other parks in Tanzania a part from the Selous.

WHEN TO GO
Except for April and May, the rainy season, each park offers  wonderful emotions throughout the year. From July to October, the dry season, animals are gathering together around the rivers, lodges and tented camps that are located in the most strategic positions for animal views and close encounters. During the green season, from December to June, animals are almost scattered inside the greener park  but at the same time animal spotting is “guaranteed”.

June-September: elephants and buffaloes are trooped  around the dry bed of rivers while  wild dogs are preparing their burrows. Daytime temperatures are pleasant and  nights  are cool. Very suitable for walking safaris.
October-November: the heat increases and lands are getting drier and drier. Animals are gathering around  rivers and lakes in search for the little water left. Also predators arrive: lions and leopards  hunting food, along with crocodiles, hyenas and wild dogs are waiting for their turn without any particular concern.
December to March :  the season of cubs ! The landscape  is gradually becoming greener. The elephants are coming back from  the Niassa reserve where they lived during the dry season, along with numerous species of birds. Days are hot, although first rains may occur and the climate is getting  wetter. The landscape is totally green.
April and May: it rains a lot and most of the lodges are closed. 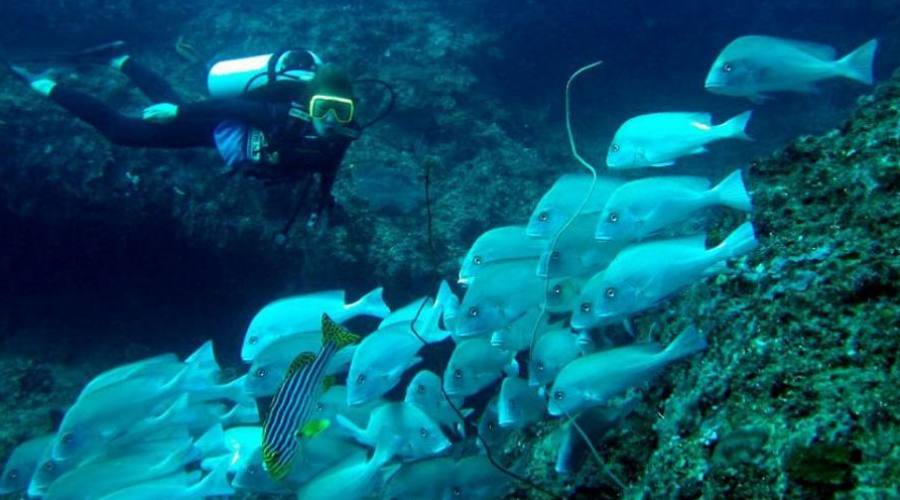